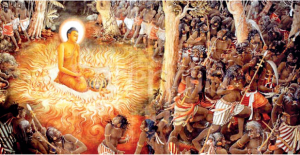 Gautama Buddha’s first visit to Sri Lanka after directing the arrogant Kassapa brothers on the correct path and the offering of the Hair Relic to god Sumana Saman are regarded as significant events that had taken place on Duruthu Full moon Poya day. The Duruthu perahera of Kelaniya Raja Maha Viharaya is also conducted on this day. Gautama Buddha’s visit to Sri Lanka is the most important event in Sri Lanka after the Rama Rawana war which is said to have been taken place in this country more than three thousand and one hundred years ago.

Settlement of the Dispute between Yakkhas and Nagas

At the time when the Enlightened One visited Sri Lanka for the first time, the inhabitants of this country were Yakkhas who are believed to be the descendants of Rawana and his brother, Vibhishana and also the Nagas. Yakkhas and Nagas were in constant confrontation. There is belief that God Sumana Saman had invited the Buddha to put an end to the hostilities. It was on this invitation that the Enlightened One visited the Mahanaga Grove in Mahiyangana at a time when the Yakkhas had gathered there for a meeting.

The Buddha stood in the Mahanaga Grove radiating light that made the atmosphere pleasant, clear, calm and gentle than the moon light. The aggregate of six colours forming a halo around the Buddha in separate circles viz. blue, yellow, red, white, crimson and the colour formed by their combination. The Yakkhas were not prepared to listen to the Buddha as they thought he was an invader of their hereditary land. Instantly when the Yakkha soldiers took up arms, it was time for the Buddha to subjugate them. The Buddha terrified them by creating a terrible combination of rain, thunder and a gale. The Yakkhas, having been terrified thought that Buddha was a supernatural being turned submissive. They obeyed the Buddha and begged for his pardon. Buddha laid a piece of cloth – Pathkada on the ground and after sitting on it he called the Yakkha and Naga leaders and admonished them. According to legends, the Yakkhas who dispersed had gone to the Giri Divaina not being able to understand the words of the Buddha. However, with the first visit of the Enlightened One Sri Lanka, our motherland was made a suitable soil for Arahant Mahinda Maha thera to establish Buddhism. We the present generation of this country are fortunate to have pure Buddhism which is a blessing uniquely enjoyed by us.

According to legends the Devas and Nagas assembled at the Maha Naga Grove in large numbers and took refuge in the Triple Gem. Among them was God Sumana Saman. According to legends, God Sumana Saman is a member of the Deva tribe from the central hills of Sri Lanka. This god had attained “Sowan” or the first of the four stages leading to Nirvana. God Sumana Saman begged for a relic for worshiping and the Buddha gave him a lock of his hair which God Sumana Saman received in a golden casket. He had enshrined it in Mahiyangana Chetiya which he built at the place where the Exalted One sat to preach Dhamma. This is the first dagoba in Sri Lanka and one of the shrines built during the time of the Buddha. The Mahiyangana dagaba which is also known as the Miyugunaseya was built at the site of the Mahanaga Grove
Forty-five years later, the “Greeva Dhathu “the collar bone relic of the Buddha was enshrined in this Dagaba by Arahant Sarabha, a disciple of Arahant Sariputra Maha Thera. The dagaba constructed by god Sumana Saman was reconstructed by Arahant Saraba Thera to the height of twelve cubits. King Devanampiyatissa’s brother, Uddha Chulabhaya constructed a thirty cubits tall Kanchuka cetiya over the earlier twelve cubits tall dagaba. After the unification of Lanka King Dutugemunu appreciated the sacredness of Mahiyangana and built an eighty cubits tall dagaba covering the thirty cubits tall one. This Dagaba has been renovated from time to time by various kings such as Dhatusena, Sirisangabo and Agbo. Miyuguna Seya which was renovated from time to time had remained unattended for some time until ‘Mahiyangana Cetiya Wardhana Samithiya’ renovated it to bring it to the present condition.
Mahaweli Ganga, the longest river in Sri Lanka which flows wild and fast through the central hills and plains of the hinterland where the country’s earliest dagaba, Miyugunaseya – Mahiyangana chetiya is situated. The Pali term “Bintenne” is Mahiyangana which is “Miyuguna” in Sinhalese Hence, Bintenna, Miyuguna and Mahiyangana are names used to identify the same place where the famous dagaba stands. At present the name commonly used as Mahiyangana. This is the exact place in Minipe where the Buddha had subjugated the Yakkhas.

Devotees attend Miyuguna Seya in large numbers especially during the month of Duruthu as it is the place purified by the touch of the Buddha’s feet more than two thousand five hundred years ago. The stupa standing at the bank of Mahaweli, the Bo tree under which Prince Sanghabodhi was entrusted to the Maha Sangha and the Mahiyangana temple provide ways and means for the devotees to get away from the sufferings of transmigration. Sumana Saman devalaya provides divine protection. Annual Esala Perahera is conducted at Mahiyangana immediately followed by Sri Dalada Maligawa Esala Perahera in the hill capital – Kandy. This Perahera is called Vedi Perahera as Veddas actively participate in it.

The subjugation of Jatila Brother and their followers

Before proceeding to Sri Lanka, Buddha put the very arrogant Kasyapa brothers in the correct path. Kasyapa brothers, Uruwela Kasyapa, Nadi Kasyapa, and Gaya Kasyapa were aggressively asserted or presumptuous Jatilas with matted hair who spent ascetic lives at Uruwela with one thousand followers. On the first Il Full moon Poya day after the Enlightenment Buddha dispatched sixty Arahants including the five Brahmin ascetics (Paswaga Mahanu) in various directions to propagate Dhamma while he himself went to Uruwela to be of service to the Jatila brothers.

Buddha’s visit to the Kingdom of Magadha

Programme schedule is as follows. 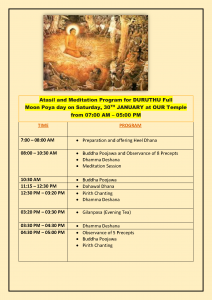