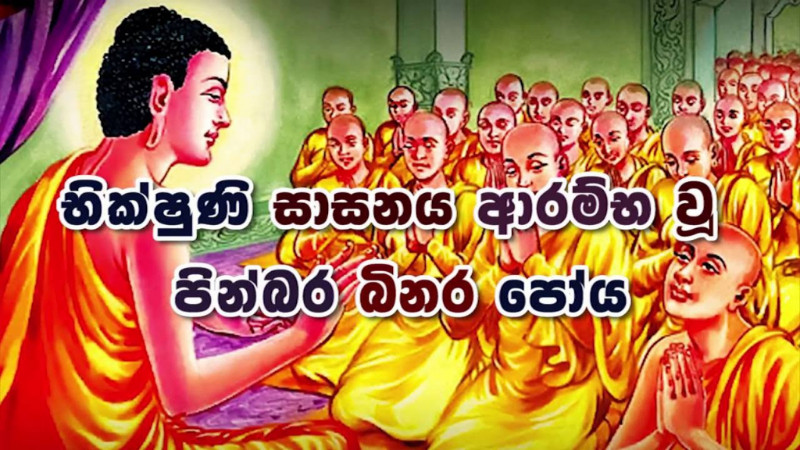 When the Blessed One was residing at Nigrodharamaya in the City of Kapilavastu, Queen Mahāpajāpatī, approached the Enlightened One and requested permission for women to enter the Order. The Buddha turned down her kind request thrice.
The Buddha left Kapilavastupura, proceeded to the City of Vesali and resided at Kutagara Hall.
In the meantime, Queen Mahāpajāpatī, the chief of the Bhikkhuni Sasanaya, who played a lead role, with five hundred wives of the princes, shaved their heads, wore yellow robes, met Venerable Ananda Thera and humbly requested him to speak to the Blessed One to grant permission for them to enter the Bhikkhuni Order.
Once again, the Buddha turned down their request, made by Ven. Ananda. Again, and again Ven. Ananda appealed to the Buddha to grant permission for Prajapathi Gothami and her 500 companions to enter the Order.
Considering the request of Queen Mahāpajāpatī the Buddha granted permission to womenfolk to enter the Sasanaya on Binara Poya day and requested them that they should strictly follow and honour the eight important principles (Garu Dharma Ata) laid down by the Buddha. It was called the Code of Conduct for Bhikkhunis.
Some of the highlights of this “Garu Dharma” are:
a) A Bhikkhuni (Nun), although she had attained the Higher Order, even a hundred years ago, she should worship and honour a Bhikkhu who had attained the Higher Order on that very day. Here the date of the seniority does not matter.
b) No Bhikkhuni should be engaged in Retreat in an area where there are no Bhikkhus. (Monks)
c) Bhikkhunis should take the advice of Bhikkhus. (Monks)
d) At the end of the Retreat, a Bhikkhuni should ceremoniously end the “Retreat” in the presence of Bhikkhunis and Bhikkhus.
e) A novice Bhikkhuni, should gain higher ordination in front of Bhikkhunis only after one year of study.
f) Bhikkhunis should not advise Bhikkhus, although Bhikkhus may advise Bhikkhunis.
Venerable Ananda described these conditions to Queen Mahāpajāpatī and stated “If you accept these conditions, the Blessed One will grant permission to initiate the Bhikkhuni Order.
Queen Mahāpajāpatī facing the direction of the Blessed One made this announcement. “Ven. Ananda, just as young men and women would bathe and adorn themselves with garlands of Jasmine flowers, so do I accept those conditions laid down by the Blessed One.
Thus, was the beginning of the Bhikkhuni Order (Sasanaya) on a Binara Full Moon day. 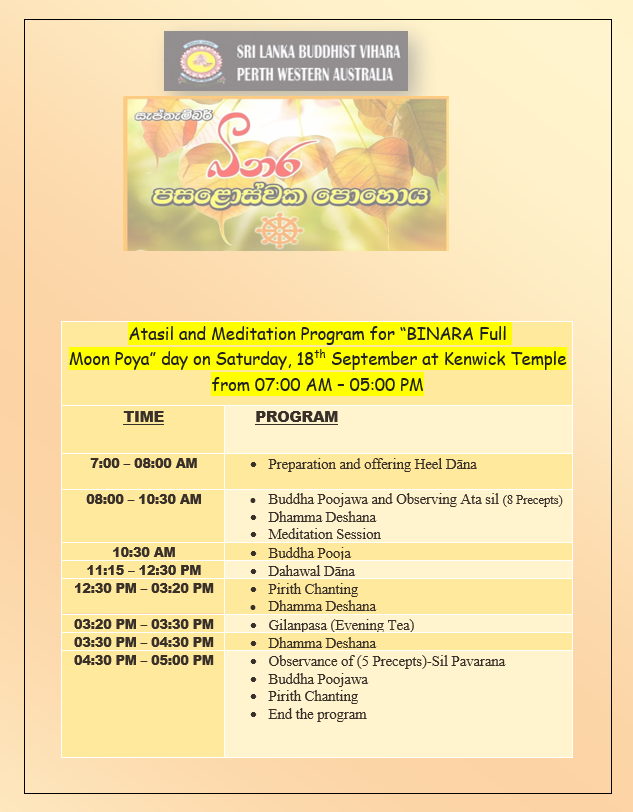