Atasil and Meditation Program for Duruthu Poya day on Saturday, 15th January at Our Temple from 7:00am to 5:00pm 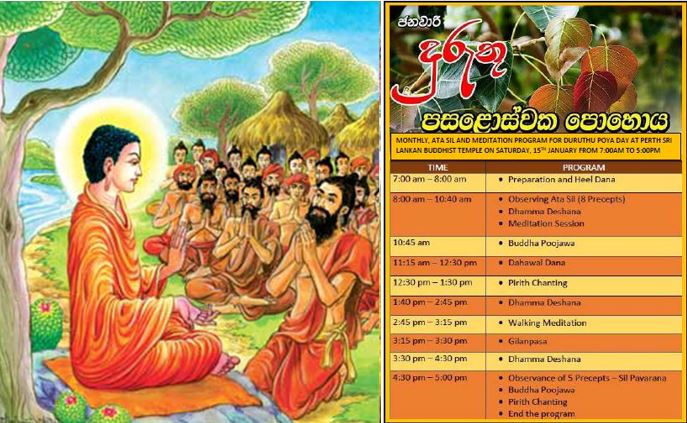 Ata Sil and Meditation program for “Duruthu Poya day” will be held on Saturday, 15th January from 7am to 5pm.

The important significance of Duruthu Full Moon Poya Day, marks Gautama Buddha’s first visit to Sri Lanka. Nine months after his Enlightenment, the blessed one visited Mahiyangana, in the Uva Province of Sri Lanka. His mission was to restore peace, to create a state of freedom from war or violence. The old chronicle Mahavamsa records and states “To free the beautiful land from the evil doing Yakkas”
At that time the Yakkhas had gathered there for a meeting. The Buddha stood in the sky above Mahanaga Grove where the Yakkhas were meeting. The Buddha stood there radiating rays of light from his body more pleasant, clear, calm and gentle than the moon light. A rainbow-like halo emanated around the Buddha.
The Yakkhas thought the Enlightened One was an invader and were not prepared to listen to him. Instead the Yakkha soldiers took up arms. It was time for the Buddha to subjugate Yakkhas. He set forth a terrible drought, heavy rains and thunder storms which the Yakkhas could not endure. They were terrified and realizing the Buddha was a supernatural being and turned submissive. They obeyed the Buddha and begged his pardon.
The Buddha laid his piece of cloth –Pathkada– on the ground, sitting on it he called the Yakkha and Naga leaders and admonished both parties.
Thus Buddha was able to create peace among them.

It was on Duruthu Poya Day the Buddha returned to Uruwela Danawwa to be of service to Jatila brothers. He preached the Dhamma from “Anantha Lakkhana Sutta” and the three brothers and their followers attained Arahantship. Accompanied by Jatila Arahants the Omniscient One proceeded to the Magadha Kingdom. This visit was made on an invitation extended by the Magadha King Bimbisara to the Buddha before his enlightenment.
King Bimbisara and his people were very happy and devotedly embraced Buddhism. The Buddha preached Dharma and all of them took refuge in the Triple Gem. King Bimbisara offered Veluvanaramaya to the Enlightened One. The Buddha made a proclamation allowing Bhikkhus to accept monasteries when offered by devotees.

Future events/programs at our temple: