Poson Full-Moon Poya Day is celebrated to mark the arrival of Buddhism in Sri Lanka in the 3rd century BC, a festival of great historical and religious significance celebrated island-wide by Buddhists. Poson, held on the full moon day of June, commemorates the occasion over 2,000 years ago when Arahat Mahinda, son of Emperor Asoka of India, converted King Devanampiyatissa to Buddhism. The main centre of celebration is Mihintale, the ancient monastic complex where the royal missionary monk Mahinda preached the first sermon to the ruling king and at Anuradhapura the ancient capital, to which large crowds of pilgrims converge. Mass religious observances, illuminations and pageants are part of the celebrations.

For Buddhists, this hallowed day of Poson is second only to Vesak in terms of importance. Although Poson is celebrated throughout the island, the major ceremonies are to be found in Anuradhapura and Mihintale. Long lines of devotees dressed in white climb the many steps to the top of the Mihintale hill first to the temple, and then to the dagobas that adorn the nearby hillocks. In addition, many devotees climb to the very top of the rock, to the spot where Arahat Mahinda delivered his initial discourses.

Poson Poya is celebrated annually with great fervour throughout the island but particularly in Mihinthale where Mahinda Thera first put his foot to preach the word of The Buddha.This is why Mihinthale is called the cradle of Buddhism in Sri Lanka. With the establishment of the Bhikkhu Sasanaya all other elements of a civilised society began to emerge with the art of writing, art, architecture, river civilization, religious rituals in song and dance forms and literature, all with royal patronage.

Many religious activities are organised during this poson period in Sri Lanka such as Sil campaigns, Bodhi Poojas, Dansalas, Poson devotional songs, Poson pandols (thoran) and lanterns. On Poson Poya Day many temples are filled with Atasil devotees and pilgrims all over Sri Lanka. The devout, clad in pure white make their way to the temple, to spend the next twenty-four hours in quiet contemplation. 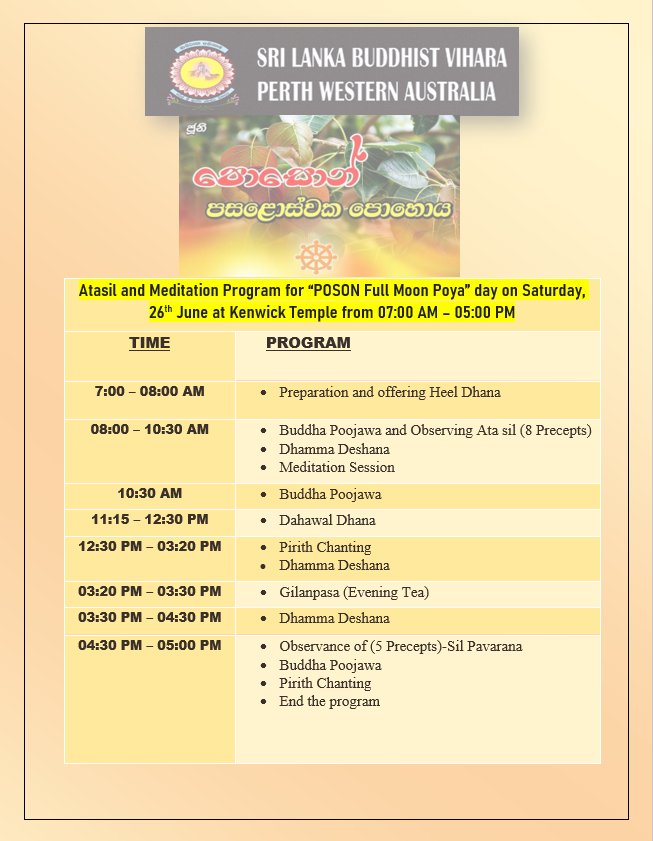