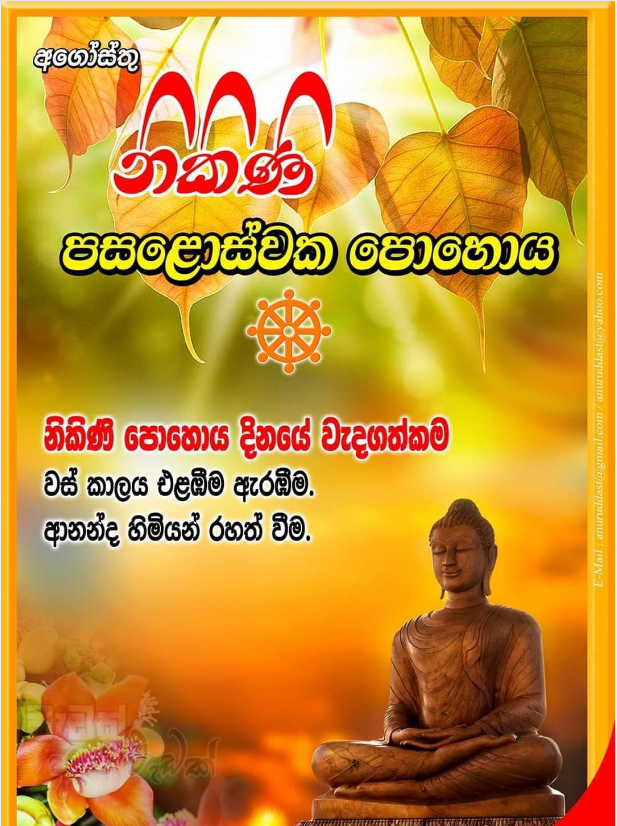 The attainment of Arahantship by Buddha’s Agraupastayake – Chief Attendant, Ven. Ananda Maha Thera, the commencement of the first Dharma Sangayana and the convocation to settle the Buddhist cannon ‘Pasu Vas’ or the commencement of the ‘Vas’ period — rainy season sojourn by Buddhist monks who have not commenced it on the Esala Full Moon Poya Day — are some of the significant occasions marked on the Nikini Full Moon Poya Day.

RAINY SEASON SOJOURN BY ASCETICS – PERA VAS AND PASU VAS
The rainy season in Dambadiva, India begins during the month of Esala (July/August). It is extremely cold in the snowy peaks of Himalayas and in the valleys where ascetics meditate under the shade of trees. Due to cold weather and heavy rain, it is not convenient for ascetics to sit under trees and meditate. Even birds build sheltered nests to live in during this season. Some of them even migrate to other countries where there is less rain and where the cold is not so severe. There is provision for Buddhist monks also to sojourn with householders during this season.

SANTHAHA KARANAYA – HARDSHIPS CAUSED TO MONKS DUE TO RAIN
Buddhist monks commence their ‘Vas’ on Nikini Full Moon Poya Day in keeping with the enactment ‘Santhaha Karanaya.’ The circumstances which led to the enactment of Santhaha Karanaya were the hardships caused to some Bhikkhus due to rain. After the establishment of the Buddha Sasana, Bhikkhus engaged in the propagation of Dharma and meditation during all four seasons — spring, summer, autumn and winter — in spite of adverse weather conditions during the rainy season.
People were concerned about the hardships caused to Bhikkhus and pains taken by them which they thought was ‘Attakilamathanuyogaya’ – giving extreme pain to the body or physical exertion. Some people went to the extent of criticizing the extreme pains taken by Bhikkhus. These criticisms reached the ears of King Bimbisara.

Buddha himself had to be away from his place of rainy season sojourning for about a week when he went to Rajagahanuwara on the invitation of King Bimbisara. On this occasion, the Enlightened One allowed his followers to be away from the place of rainy season sojourn for a week if they had to comply with the invitation of devotees.

THE FIRST DHARMA SANGAYANA
It was on the Nikini Full Moon Poya Day, three months after the Buddha ‘Parinibbana’ that the first Dharma Sangayana or the convocation was held to protect the Buddhist cannon. The immediate cause for conducting the first convocation or Dharma Sangayana was the behaviour of a monk by the name of Subaddha after Parinibbana of the Enlightened One.

LAMENTATION OVER PARINIBBANA OF THE ENLIGHTENED ONE
All ordinary bhikkhus who had not attained Arahantship excepting monk Subaddha lamented over the Parinibbana of the Buddha. Buddha’s Agra Upasthayake, ‘Dharma Bhandagarika’- the treasurer of Dharma, Ananda Maha Thera was among those who lamented. Monk Subaddha had become an ascetic during his old age not actually to practice it but because he had no other way of living. He had requested the monks not to mourn but to be happy as there was no one after Buddha to give them orders.

REASON TO HOLD THE FIRST CONVOCATION
Arahants led by Maha Kassapa Thera felt that the behaviour of ascetic Subaddha was an indication of problems among members of the Sangha community and on Esala Full Moon Poya Day, two months after the Parinibbana of the Buddha, decided to hold the convocation to settle the Buddhist cannon. This was the first Dharma Sangayana.

It was conducted during a period of seven months from the following Nikini Full Moon Poya Day. Even during the time of Buddha, problems arose among the Bhikkhus such as the ‘Sangha Beddha’ or division among bhikkhus (those versed in morals) and ‘Vinayadhara’ bhikkhus (those versed in and observed the precepts of property of conduct) but the Buddha settled them amicably.

ARAHANT MAHA KASSAPA THERA
Arahant Maha Kassapa Thera was a Bhikkhu who spent most of the time in Himalayas as an ascetic. This he did presumably to avoid being mistaken by the people for the Buddha as he was physically identical with the ‘Thathagatha.’

Maha Kassapa Thera was in the city of Pavaat the time of Buddha’s Parinibbana. As soon as he heard about the Maha Parinibbana, he came to Kusinara with his followers. Maha Kassapa Thera consoled the ordinary monks who mourned the Parinibbana of Gautama Buddha and after the funeral of the Thathagatha he made arrangements for the first Dharma Sangayana.

ATTAINMENT OF ARAHANTSHIP BY ANANDA MAHA THERA
Ananda Maha Thera had gained eminence in erudition and possessed a lot of knowledge in Dharma and was second only to Buddha in preaching. Buddha appreciated him when he preached Dharma to a group led by King Mahanama Sakya. He was ‘Dharma Bhandagarika’ – treasurer of Dharma having heard all the discourses of the Buddha. He was second only to Buddha in intelligence, good sense, prudence and circumspection. He had reached the apex in understanding and apprehension. In serving as ‘Agra Upasthayake’ – Buddha’s chief attendant, he did everything possible for the safety and comfort of the Buddha.

ANANDA MAHA THERA’S DETERMINATION TO SAVE BUDDHA FROM ELEPHANT NALAGIRI
When the furious elephant Nalagiri came chasing after the Buddha, the Thera stood in between the Buddha and the elephant exhibiting his courageousness when he felt the need. He was second only to Buddha in rationalism, prudence and wisdom. In spite of such virtues and good qualities, he did not attain Arahantship by the time of Buddha’s Parinibbana, presumably due to his desire and ambition to tender aid, to serve and wait upon the Buddha.

He had attained ‘Sowan’ – the first of four paths to Nirvana, having heard the Dharma preached by Arahant Punnamattanipatha Thera a few days after entering priesthood. Since he had not attained Arahantship, he could not bear the pain of mind when he heard about Buddha’s decision to attain Parinibbana. He leaned against the door at the temple and started crying.

He was the most knowledgeable person in the doctrine being the ‘Dharma Bhandagarika’- the treasurer of Dharma and having listened to all the discourses of the Enlightened One.

Anguttara Nikaya was the responsibility of Arahant Anuruddha Maha Thera and his followers. All the Theras were made responsible for the Kuddaka Nikaya. Vinaya Pitake was entrusted with Arahant Upali Maha Thera. At this convocation, the preludes or introduction to Dharma Sangati, Vibhanga Dhatukata, Puggala Pragnappti and Yamaka Pattan of Abhidharma were also rehearsed.

PANCA SATHIKA SANGIKTHI
This convocation was called ‘Panca Sathika Sangikthi’ as it was held with the participation of 500 Theras who had attained Arahantship. 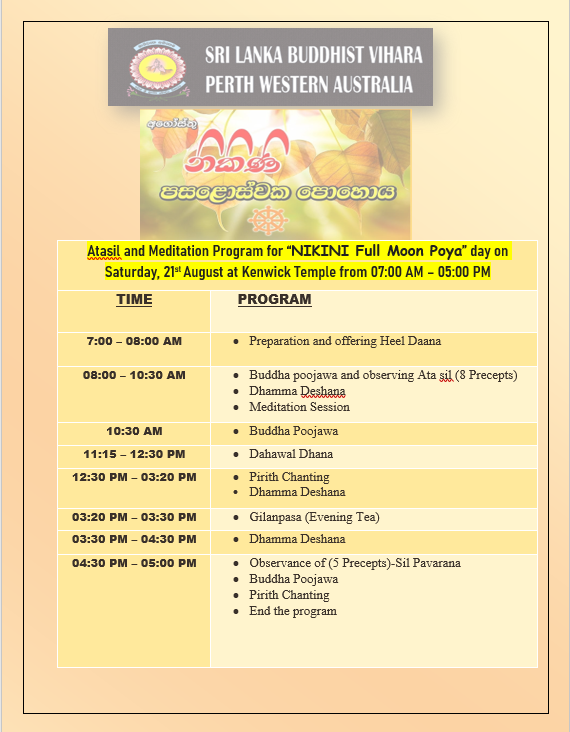