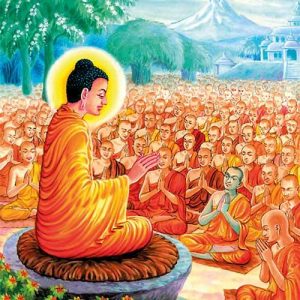 Bringing together all monks for the first-ever Buddhist congregation, the appointment of Arahants Sariputta and Moggallana by the enlightened one as his chief disciples, promulgation of pre-liberation or collection of precepts of Vinaya or discipline and the determination of the term of life of the enlightened one by Gautama Buddha are significant events associated with Navam Full Moon Poya Day. These events make Navam Poya a day of paramount importance for Buddhists worldwide.

FIRST-EVER BUDDHIST CONGREGATION
In the eve of the first Navam Full Moon Poya Day after the enlightenment of Gautama Buddha, there were more than one thousand two hundred and fifty disciples in the order of Maha Sangha. The enlightened one envisaged the need for principles of management to maintain the moral conduct and discipline of the followers. Although there had been no problem until then, the farsighted enlightened one would have anticipated incidents of breach of conduct and morality when the community of Sangha grew in number and variety.

DELEGATION OF POWERS BY THE ENLIGHTENED ONE
The Buddha had observed the inconvenience caused to his prospective disciples who had to come all the way to Veluvanaramaya – where the enlightened one dwelled – whenever they required his advice or wanted their doubts clarified. During the early days after enlightenment, the aspirants of asceticism or monasticism were ordained by the Buddha himself. At the first congregation, Gautama Buddha introduced the principles of delegation of powers and functions and requested the members of the Maha Sangha to ordain the aspirants of asceticism without requiring them to come all the way to see the Buddha when they wanted clarification and further advice.

APPOINTMENT OF ARAHANTS SARIPUTTA AND MOGGALLANA AS CHIEF DISCIPLES
It was on this day that ascetic Sariputta entered the Rahat path, the last and highest path to Nirvana. On the same day, the Buddha appointed Sariputta as his chief disciple “Dakkhinasavu.” Moggallana who had attained Arahantship a fortnight earlier was appointed as the other chief disciple, “Wamathsavu.” Some disciples were concerned over the fact that Arahant Sariputta, who had attained sainthood on the same day, was appointed as the chief disciple despite the fact that there were many others who had attained Arahantship earlier. The Buddha with his divine eye realised what the disciples were reflecting upon and cleared their doubts by explaining the circumstances under which these appointments were made. The Buddha pointed out that proper place had been offered to proper persons.

KOLITHA AND UPATISSA WHO WERE APPOINTED AGRASHRAWAKES AS ARAHANTS SARIPUTTA AND MOGGALLANA
During the time of Gautama Buddha, there were two villages known as Kolitha and Upatissa in Rajagaha. There were two young men in two families in these villages and they were known by the names of the villages.These young men were intimate friends. Upatissa who was the son of Brahmini “Sari” was also known as Sariputta and Kolitha’s other name was Moggallana. One day, when both of them were enjoying a hilltop festival called Giragga Samajja, they realised how vain and transient sensual pleasures were and decided to leave the sensual world and seek the path of release. They left home and went at first to ascetic Sanjaya who had a following of five hundred disciples. Before long, they acquired the entire knowledge ascetic Sanjaya could impart but they could not discover the path to emancipation. They returned to the village and entered into an agreement that whosoever first discovers the path should teach the other.

ARAHANT ASSAJI – ONE OF THE FIRST FIVE DISCIPLES OF GAUTAMA BUDDHA
One day, Upatissa came across ArahantAssaji, one of the first five disciples of Gautama Buddha. He was going from door to door begging for food. Having observed the saintly deportments of this dignified person, Upatissa thought he was surely one of those who had attained Arahantship or one who was treading the path leading to it. At the end of the begging tour, Upatissa approached ArahantAssaji, fulfilled the preliminary duties of a pupil by offering water from his pot and after meals made inquiries. “For whose sake, sir, have you retired from the world? Whose doctrine do you profess?”

VENERABLE ASSAJI GUIDING UPATISSA
Arahant Assaji told Upatissa that he was still a novice and was not able to expound the Dharma to him at length. Anxious to learn, Upatissa begged him to say little or much. “Tell me just the substance. The substance only do I require.” he said. Thereupon, ArahantAssaji uttered a quatrain, skillfully summing up the profound philosophy of the Buddha.

Venerable Assaji guided him so well in the path that on hearing the first two lines, he attained Sowan. In accordance with the agreement, Upatissa immediately went to Kolitha and on hearing the whole stanza from Upatissa, Kolitha too attained Sowan. As advised by Venerable Assaji, they decided to go to Rajagahanuwara, Devramvehera to see the Buddha.

ASCETIC SANJAYA’S REFUSAL TO SEE THE BUDDHA
They invited ascetic Sanjaya to accompany them to the Buddha but Sanjaya refused to go with them. However, his followers decided to go to see the enlightened one. Consequently, Kolitha and Upatissa, accompanied by two hundred and fifty followers of ascetic Sanjaya, went to Rajagaha, Devramvehera. In compliance with their request, the enlightened one admitted them to order by mere utterance of the words “Eta Bhikkhave” (Come O Bhikkhus).

VEDANA PARIGGAHA SUTTA
A fortnight later, Venerable Sariputta attained Arahantship on hearing theVedana Pariggaha Sutta which was expounded bythe Buddha to the wandering ascetic Dighawaka. That was the first Navam Full Moon Poya Day after the enlightenment when the first congregation was held. In the evening of the same day, the Buddha conferred the exalted positions of the first and second disciples in the Sangha respectively on Venerable Sariputta and Moggallana. Venerable Moggallana attained Arahantship a week earlier by meditating at the village  of Kallawala. Prestigious positions of Dhammasenadhipathi and Dhammapurohita in Buddhist priesthood were conferred on Arahants Sariputta and Moggallana respectively.

PRATAMBI SAMBODHI PERIOD
The first twenty years after the enlightenment of Siddhartha Gautama Buddha is called the “Pratambi Sambodhi” period. During this period, those with less desire were ordained. They observed Vedic rules of ascetics and there was no need to enforce rules and religious precepts to maintain their conduct and behaviour. However, in the course of time, the Sangha community increased in number and the benefits available to them were more than before. They were well-read and learned and hence it was deemed necessary to guide them in the correct path for the maintenance of their conduct in the future though, so far, there had been no problems. To fulfil this need, the Buddha on Navam Full Moon Poya Day enforced a precept on the propriety of conduct, modesty, reversible, obeisance and submissiveness, religious obedience and fulfillment of duties of priesthood.

DETERMINATION OF THE TERM OF LIFE OF THE ENLIGHTENED ONE
Gautama Buddha reached his eightieth year. His death was drawing near. His two chief disciples predeceased him. So had Venerable Rahula and Yasodhara. One day, he addressed Venerable Ananda and said: “Ananda, whosoever had fully developed the four paths of accomplishment (Iddhipada) could, if he so desires, remain in the same birth for a Kappa and a little more. The Tathagatha has thoroughly practised and developed the four Iddhipadas; will (Canda), effort (viriya), thought (citta) and investigation (Vimansa).

When Venerable Ananda left him, Mara approached the Buddha and invited him to pass away. The Buddha accepted the invitation of Mara and on Navam Full Moon Poya Day that year determined the term of his life and after three months attained Parinibbana at Kusinara on Vesak Full Moon Poya Day. 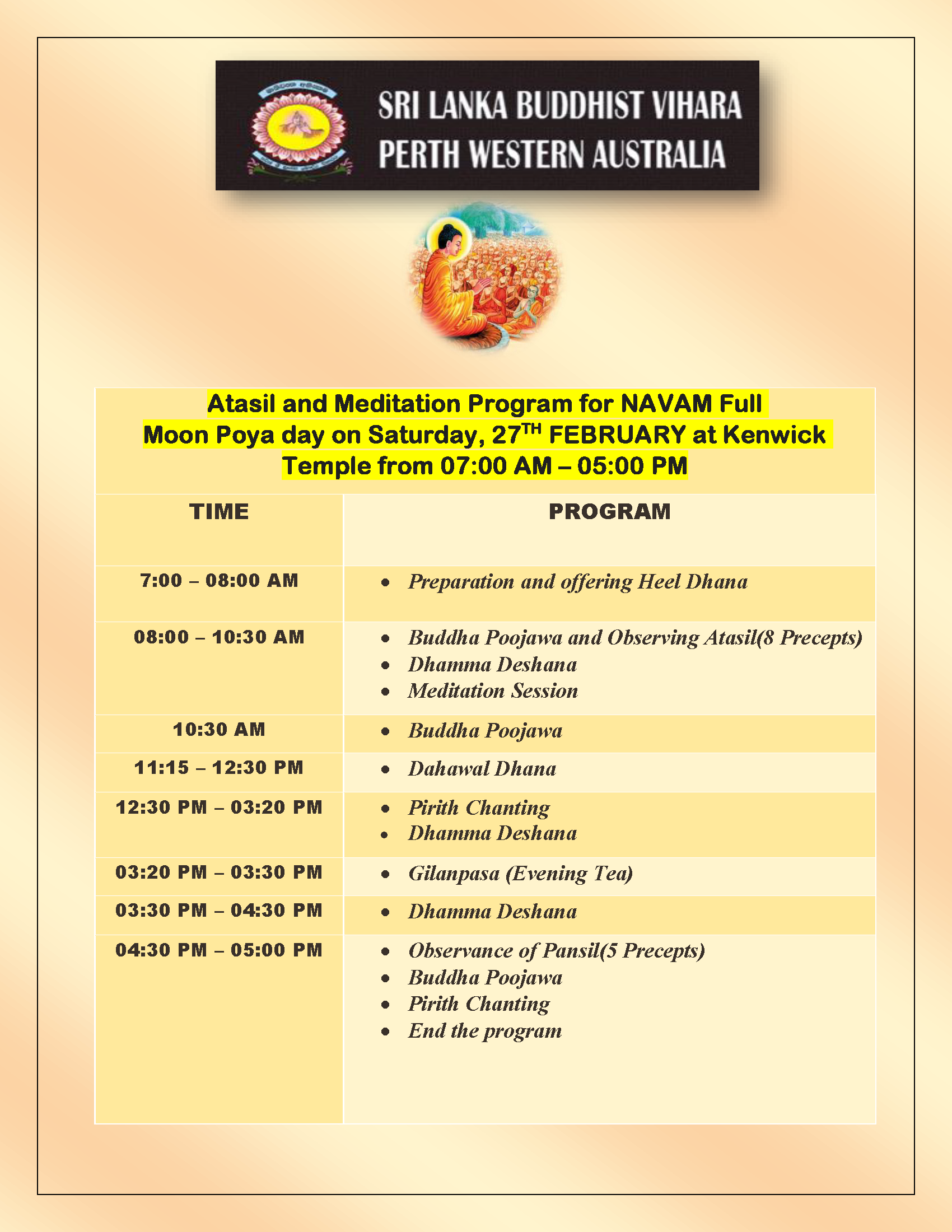