Atasil and Meditation Program for Bak Full Moon Poya day on Saturday, 23rd April at our Temple from 7:00 am to 5:00 pm 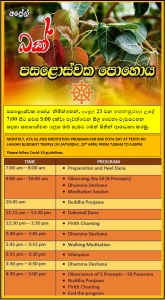 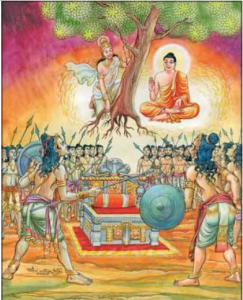 Atasil and Meditation Program for BAK Full Moon Poya day on Saturday, 23rd April At OUR Temple from 7:00am to 5:00pm

Gautama Buddha visited Sri Lanka for the second occasion. The objective of this visit was to convince the rulers of Lanka- Naga Kings and their followers that hatred is not appeased by hatred but by non-hatred.
Naga kings Chulodara and Mahodara were in dispute over a gem studded throne. Mahodara’s father owned a gem studded throne and on his death bed he had given it to his grandson, Chulodara.  Mahodara was not happy about it. He was anxious to own that throne by any means. They were constantly struggling and the combat was likely to be developed to a deadly war bringing disaster to both sides.

Gautama Buddha who was sojourning in Seweth Nuwara, Devram Vehera saw the impending danger with His divine eyes and decided to settle the dispute. Both Naga Kings were up in arms with their followers and the Enlightened One appeared at the battle ground accompanied by god Samuddhi Sumana who was in a Kiripalu tree at the gate of Devram Vehera.  It is said that god Samuddhi Sumana had provided shelter to the “Enlightened One by holding the Kiripalu tree over Him –
Wrathful combating groups were not prepared to listen to the Enlightened One.  The Buddha created an environment of darkness to subjugate the Nagas and after bringing them under His control He preached Dharma from Kakalika Jathakaya which relates the circumstances under which an owl and a cuckoo became arch rivals and the Latukikita Jatakaya in which the Bodhisattva was born as a snipe and saved the lives of a conflagration by observing satya paramita- the strict observation of the truth.

The Enlightened One made the Nagas realized that hatred is never appeased by hatred “Nahiverena Verani, sammantida kudacanan; averena ca sammanti, esa dhammo sanatano” Hatred is not appeased by hatred: it is appeased by non-hatred. Buddha had explained in simple terms the ill effects of anger, hatred, enmity and resultant disputes, quarrels and wars.
The Enlightened One also explained the ill -effects of avarice- Tanha- “Tanhaya jayati soko, tanhaya jayati bhayan Tanhaya vippa muttassa natty soko kuto Bhayan” Avarice leads to sorrow and fear. This was what the Omniscient One made the Nagas realize. He was thus able to bring about reconciliation between rival Naga groups.  Neither Chulodara nor Mahodara had any more desire to own the gem throne.